Recently I published a research about a new type of valve amplifiers with current source drive of the power valves. This group of amplifiers I called “Trans”. You find all details in my book “Vanderveen Trans Valve Amplifiers”, available in three languages. See the listing below where to obtain.

In my Trans-book I gave several possibilities to realize the Trans concept. There exist far more solutions than I have published. Even now I am in full speed developing new amps, to summit in an all valve TRANS-SE10 kit; see an earlier prototype below.

My TubeSociety students also built several Trans amplifiers. Meanwhile I notice a growing interest of DIY-ers worldwide. Some of them sent me their solutions and results.

I wish to share all of these results and findings with the Valve-amp community, by publishing these Trans amps on my website. I hope that more contributions will be sent to me, for publication.

What is special in Trans? The best way to explain is: the combination of current source and power valve creates a super power valve with high linearity and small internal plate impedance. High linearity means small harmonic distortions. Low plate impedance suppresses magnetic distortions in the output transformer. It also creates a good damping of the loudspeaker. All together this removes a “curtain” in front of the soundstage, giving clear access to the smallest details. Comparing Trans with low impedance linear triodes, demonstrates that Trans equals or surpasses their excellent sound quality.

However, you don’t get all these benefits for free. Special conditions should be met. They demand another way of thinking and designing. I explained this in my books. For extra support, I now open this webpage to show new findings and solutions.

Enjoy reading and please don’t hesitate to share your results. 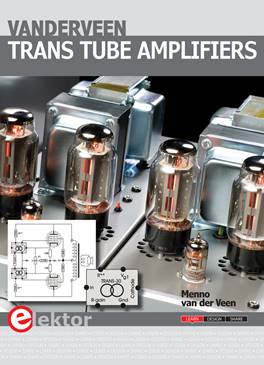 Around end 2015 Ajay (Austin Texas, Dit e-mailadres wordt beveiligd tegen spambots. JavaScript dient ingeschakeld te zijn om het te bekijken.), (1-Ajay) constructed a Trans amplifier with the transformers and case of a Boyuu amp (2-Ajay). He applied the BSP135 as voltage controlled current source and used constant current sources in the cathodes of the power tubes to stabilize the operating point. The schematics is shown in (3-Ajay). He designed a simple effective PCB ( 4-Ajay) to construct this amp. After completion he took this inexpensive amp with standard components to Mumbai India, to compare with his friends with an earlier built very expensive “Baby Ongaku” (5-Ajay). See (6-Ajay) for their final conclusions about the sound quality. These results are striking, because they clearly show that Trans pleases the ear, as Baby-Ongaku does. But, not considering the huge inequality in price, why are there some differences?

The research by means of measurements was later solved by my TubeSociety student Hessel (Netherlands, Dit e-mailadres wordt beveiligd tegen spambots. JavaScript dient ingeschakeld te zijn om het te bekijken.), who constructed almost the same amplifier, however using VDV-toroidal output transformers plus some of his bright findings. (1-Hessel) shows the schematics of his amp and (2-Hessel) the construction while (3-Hessel) gives measurement results. Now we can try to answer the question: “can we measure what was heard”. The first measurement of frequency range shows that the actual range is wider than -3dB from 20 Hz to 20 kHz: wide enough for our ears. The second measurement shows rather large THD, however the higher harmonics are declining (as they should) and the second harmonic is not that strong (the result of the Trans-concept). This explains the Mumbai findings where the Ongaku has a stronger 2-nd harmonics content, which “pleases” the ear. Third measurement: the linearity (constant gain as function of input signal level at four different frequencies) of Trans is excellent, due to the low impedance drive of the opt, explaining the good reproducing of micro-details. Last but not least measurement 4: the output impedance is rather small and constant at low frequencies, explaining the tight bass-reproduction. Not all is said and not all is explained, but we have some good indications that subjective observations and measurements coincide.

Trans based Vatsea amplifiers: This year I designed the Single Ended Vatsea-kit for my students with special toroidal SE-OPT’s and mains transformer. Amplimo constructed a limited number of these kits only for our experiments. In the kit I included the ECF802 where its pentode section was meant to be applied as a voltage driven current source. Its triode section should linearize the F-section. Immediately, while waiting for the kits to come, Henk Zwijnenburg started experimenting with his EL84-based SE-amp, using the EF86 as current source. See photo-21 and his sketch of schematics-22 where he later implemented the ECF802. Henk was the only one using other components than prescribed for the Vatsea contest. However, his contribution was of such importance that I invited him to take part in the contest and he scored second best! It is remarkable that Henk applies a coupling capacitor while I have prescribed in chapter 5 of my Trans-book that DC-coupling is mandatory. So, Henk does not obey my strict rules! I invite you to study his solution and find the explanation why his schematic does not change my rule. Jacques van Eijk used the BSP135 current source in his amplifier, expanded with a constant current source (CCS, decoupled with 100 uF) in the cathode of the KT120 power tube. This solution makes the amp insensitive to mains voltage variations. See photo-23 and his schematics-24 plus measurements. The distortion graphs show instability in the 20 Hz environment, caused by the small 100uF cathode capacitor (advice: apply 2200uF or larger). The winner of the contest was Edwin Reins. His beautiful laser engraved stainless steel amplifier contained the BSP135 current source combined with improved power supplies. See photo-25 and his description-26. Last but not least: Frank de Wolf made many experiments and evaluated his amp in LTspice. Unfortunately his power supply suddenly showed problems (oscillations) and we have not been able to audition his great work. Such can happen and I am really sorry for that. 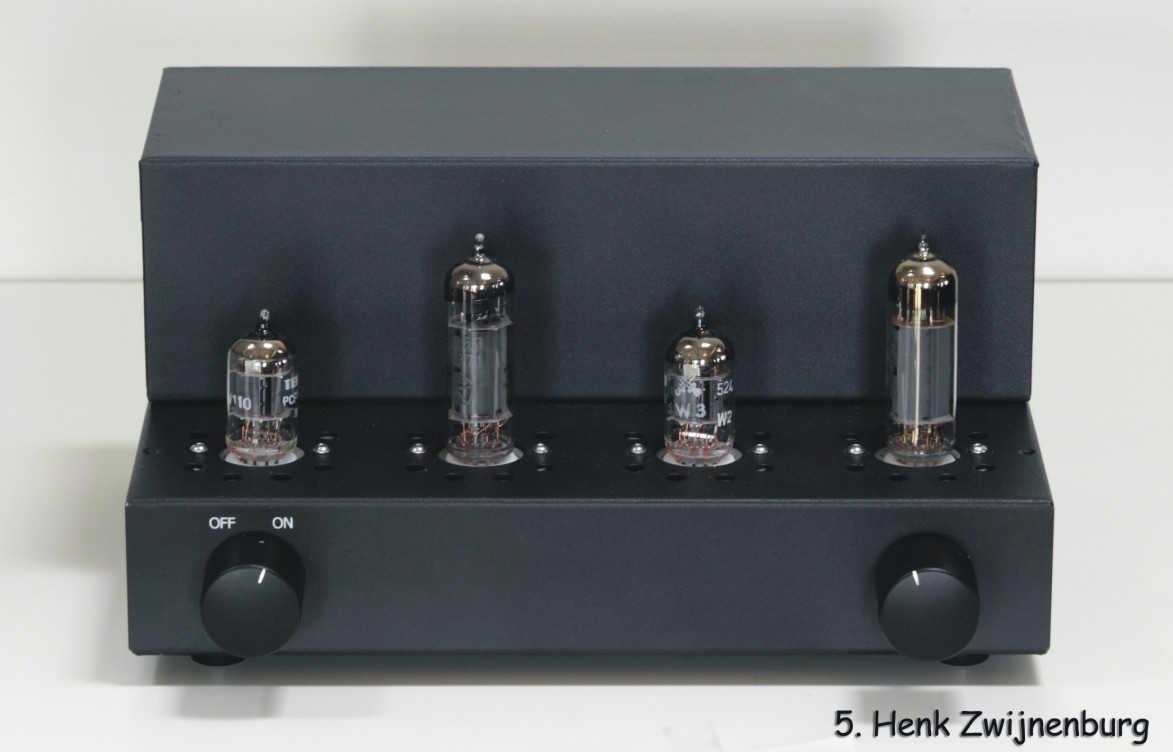 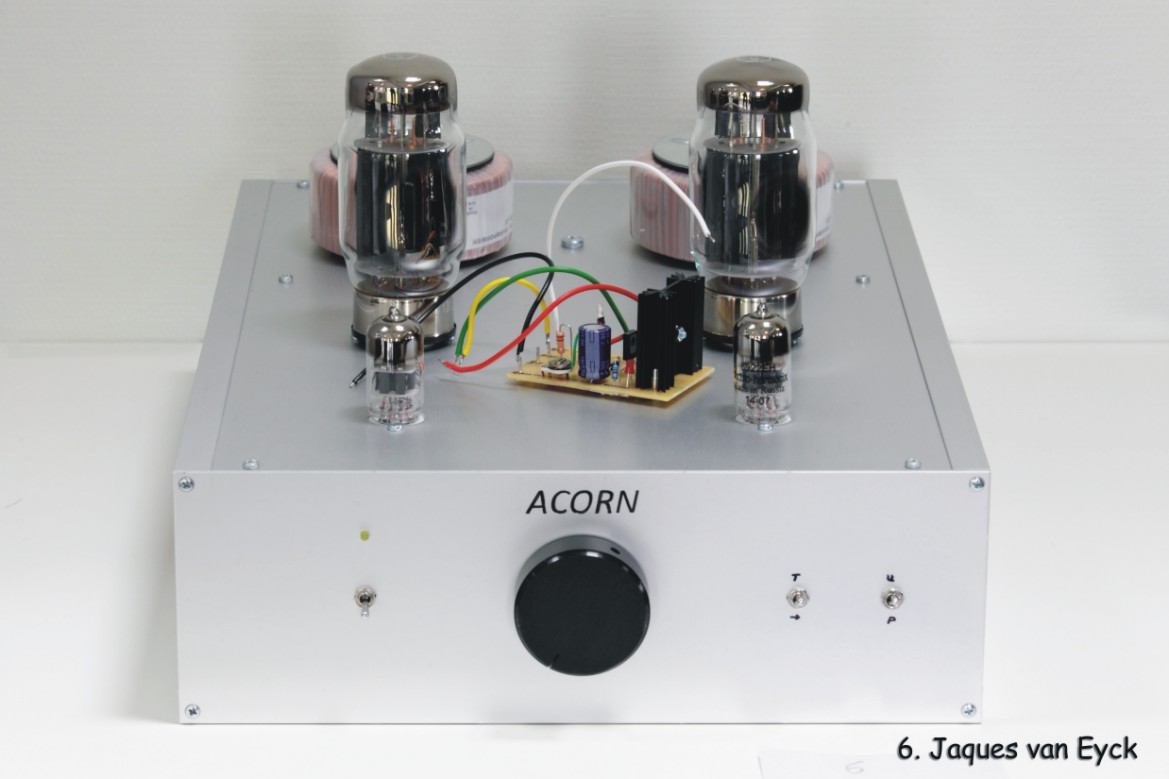 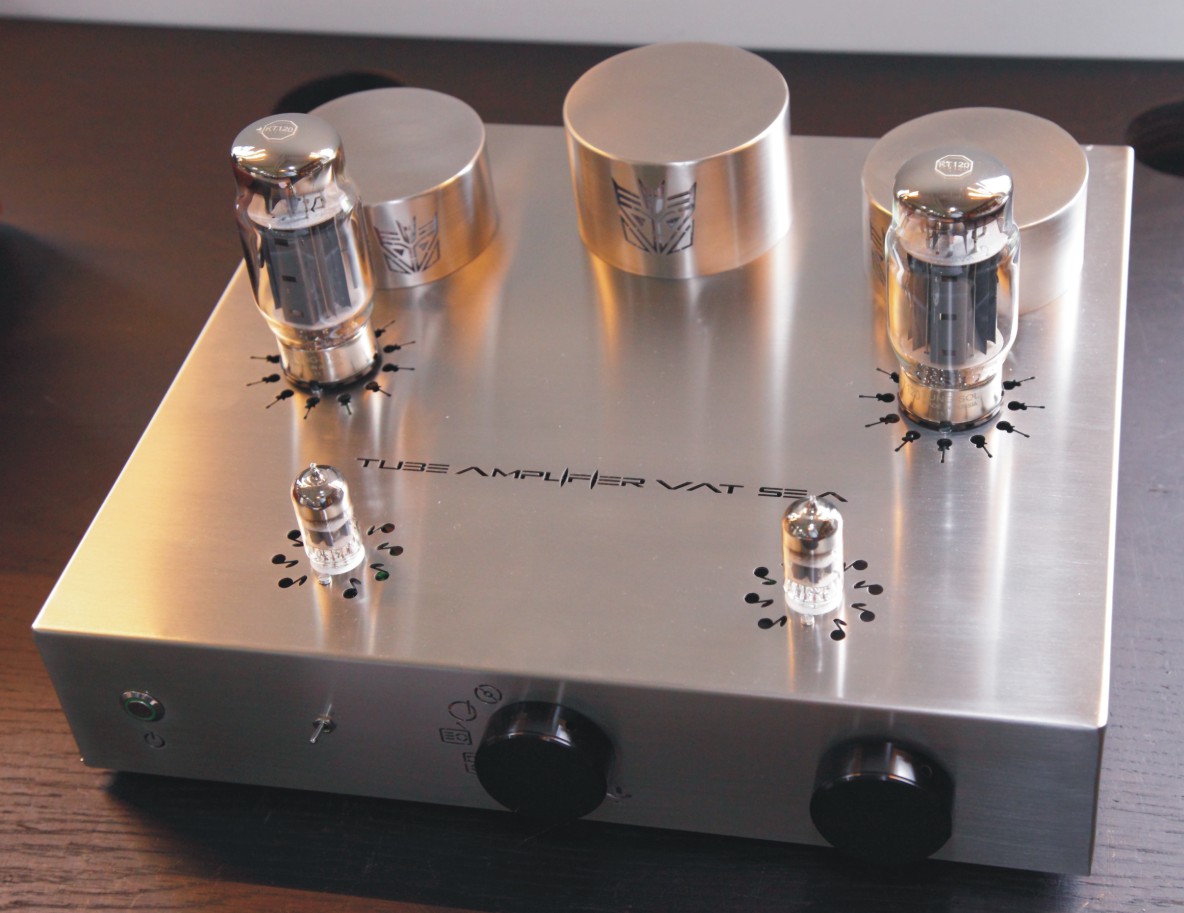