The TS-project for the year 2017-2018 is the design and construction of a stereo turntable moving-coil (MC) or moving-magnet (MM) pre-amplifier. Also guitar amplifiers were evaluated.

Many students came to the evaluation day; see photo-a. All photos are made by Yeb de Witte; thanks for that. We listened to 5 amps in total. We ranked the amplifier between 1 (bad) and 5 (superb). Per pre-amp we listened to an excellent classical music recording followed by a highest quality modern music recording. The last heard recording per test was the first recording of the next test, to ease comparison. This method is not ideal, because the brain memory is (too) heavily loaded. For that reason, the amps of the two best finalists were retested with only one suburb recording. It was striking that this last test made winner-2 to become winner-1, showing inversion. Next year I hope to have designed a better test method.

Last year I said that the first amplifier in the test never is the winner. Playing the first amp is used by everyone to get used to the listening room, the speakers, the sound stage, the power amplifier (Vanderveen Trans-30PP; subject of our next year TS-project), the program material and so on. For this reason, our first pre-amp was a professional one, slightly below € 1000 , with opamps. A nice open detailed soundstage which got a student's ranking of 3.6. The turntable we used is a Transrotor (thanks to Erwin) with a Benz MC-cartridge, see photo-b. For those students who constructed an MM pre-amp, the Vanderveen MC10 step-up transformers were available, see photo-c. So, all students used the same excellent Benz-MC cartridge. 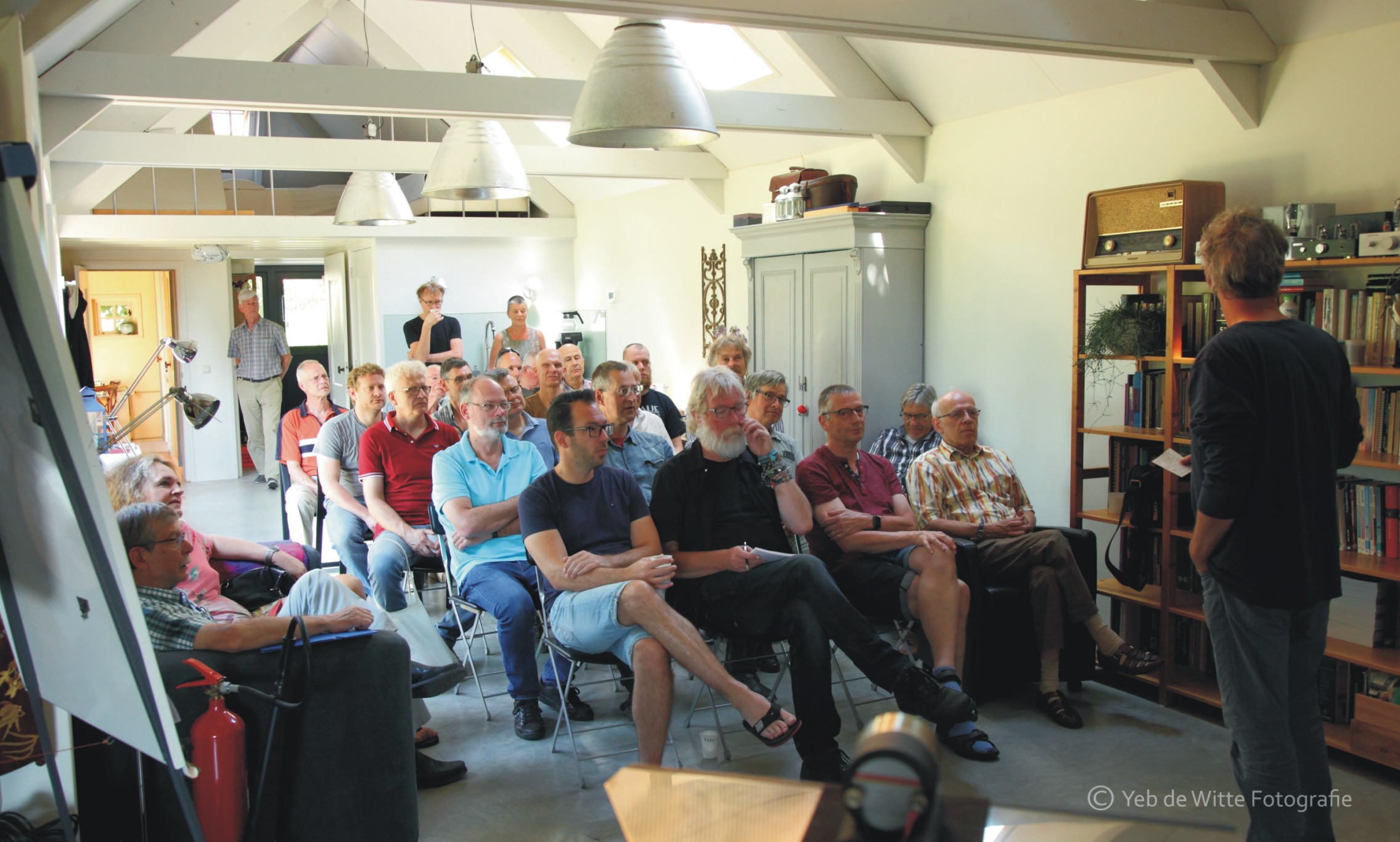 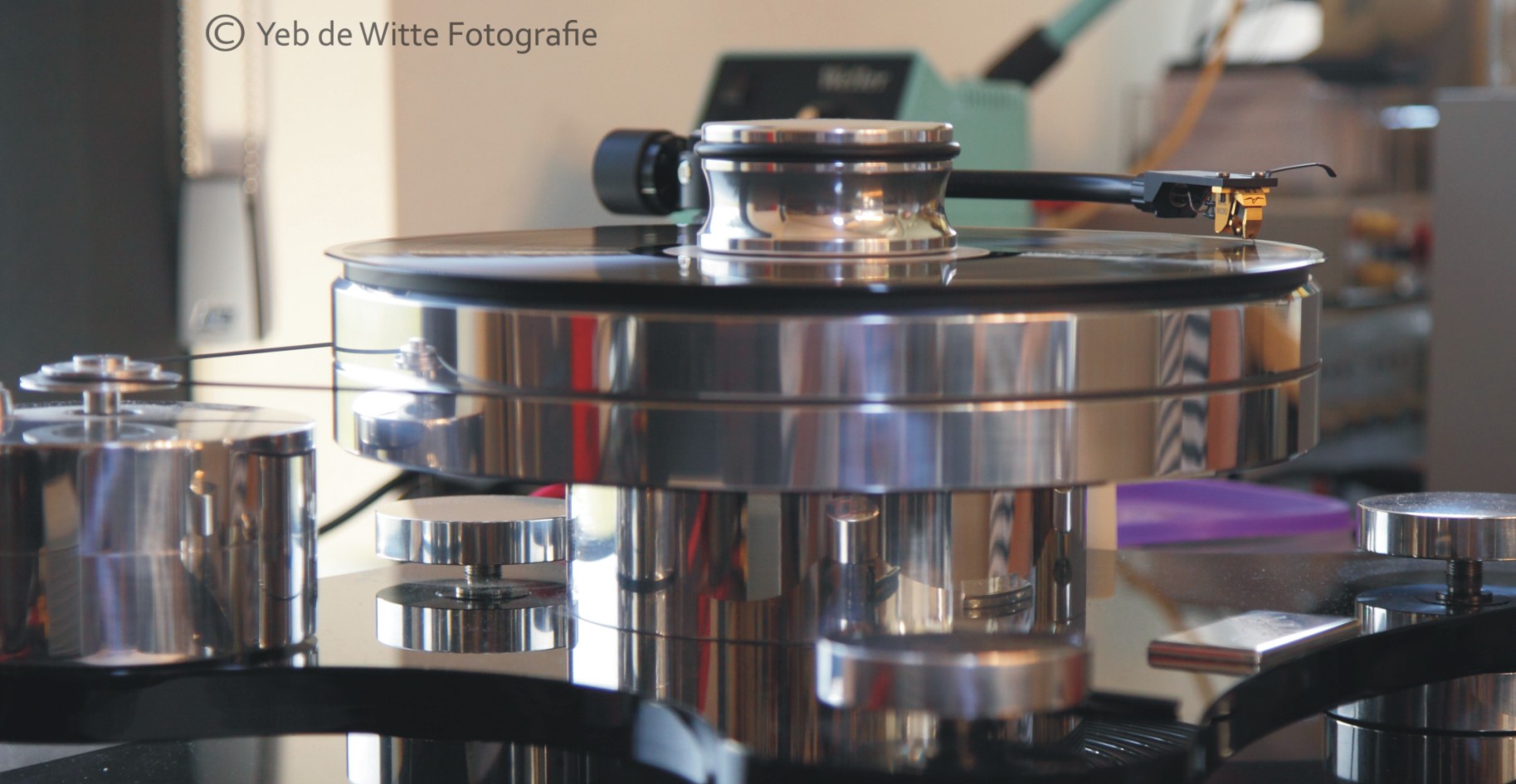 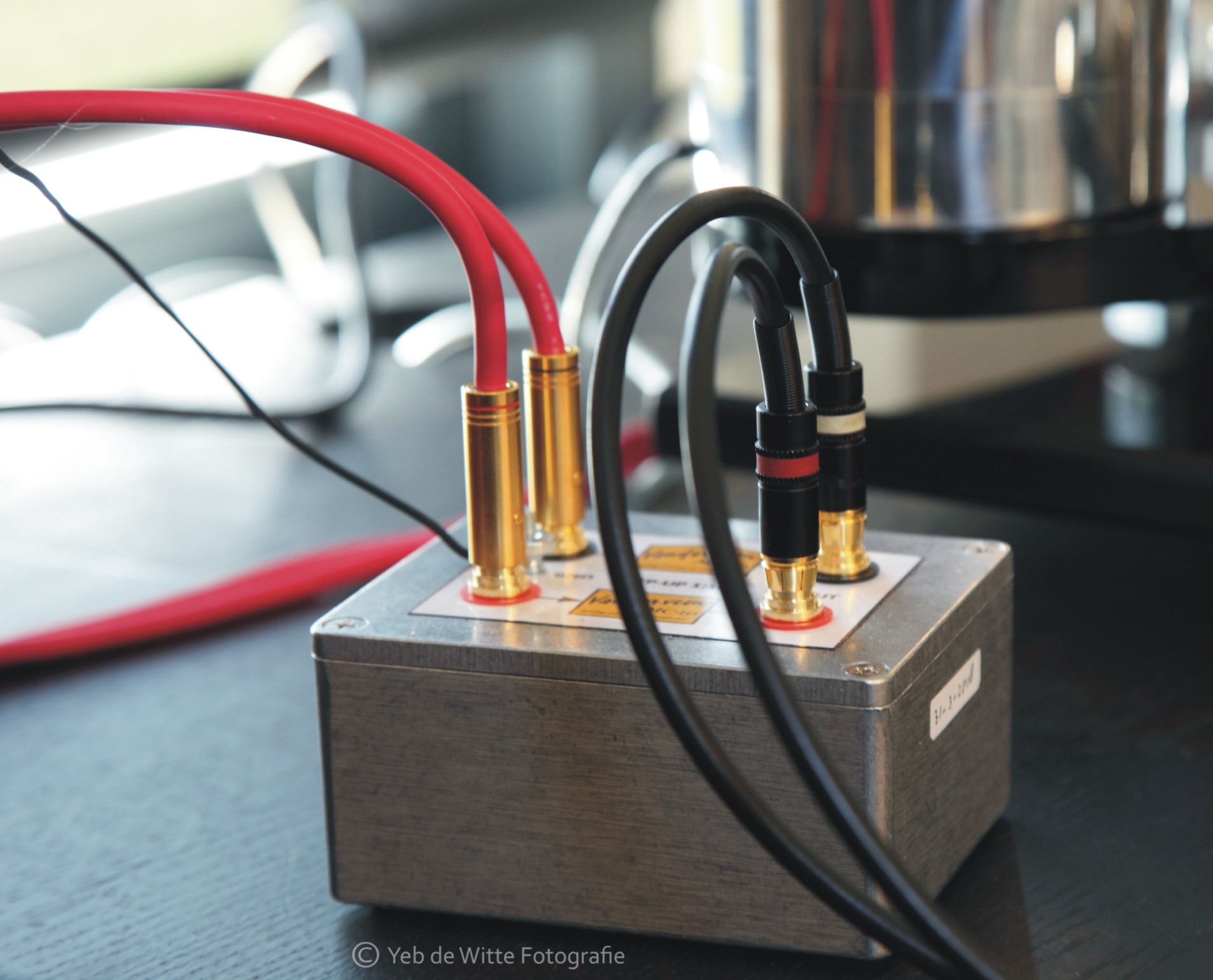 Evert Jan van der Glint demonstrated his tube pre-amp where he focused on the quality of the coupling capacitors, see photo-d. Because this pre-amp was bought, no schematics or further description are available. He got a ranking of 3.8, which is a first indication that tubes sound different compared to opamps. The next contester was Frank Leegstra, see photo-e and read his report TS2017-Frank. He focused on optimal operation points of the applied ECC88 tubes to reduce flicker and current noises. His sound quality was impressive with a 4.4 ranking. Erwin Reins was the next demonstrator with very high quality PCB's inside his brushed steel box (photo-f). Read the details of his design in TS2017-Erwin; he finished with a 4.6 ranking. 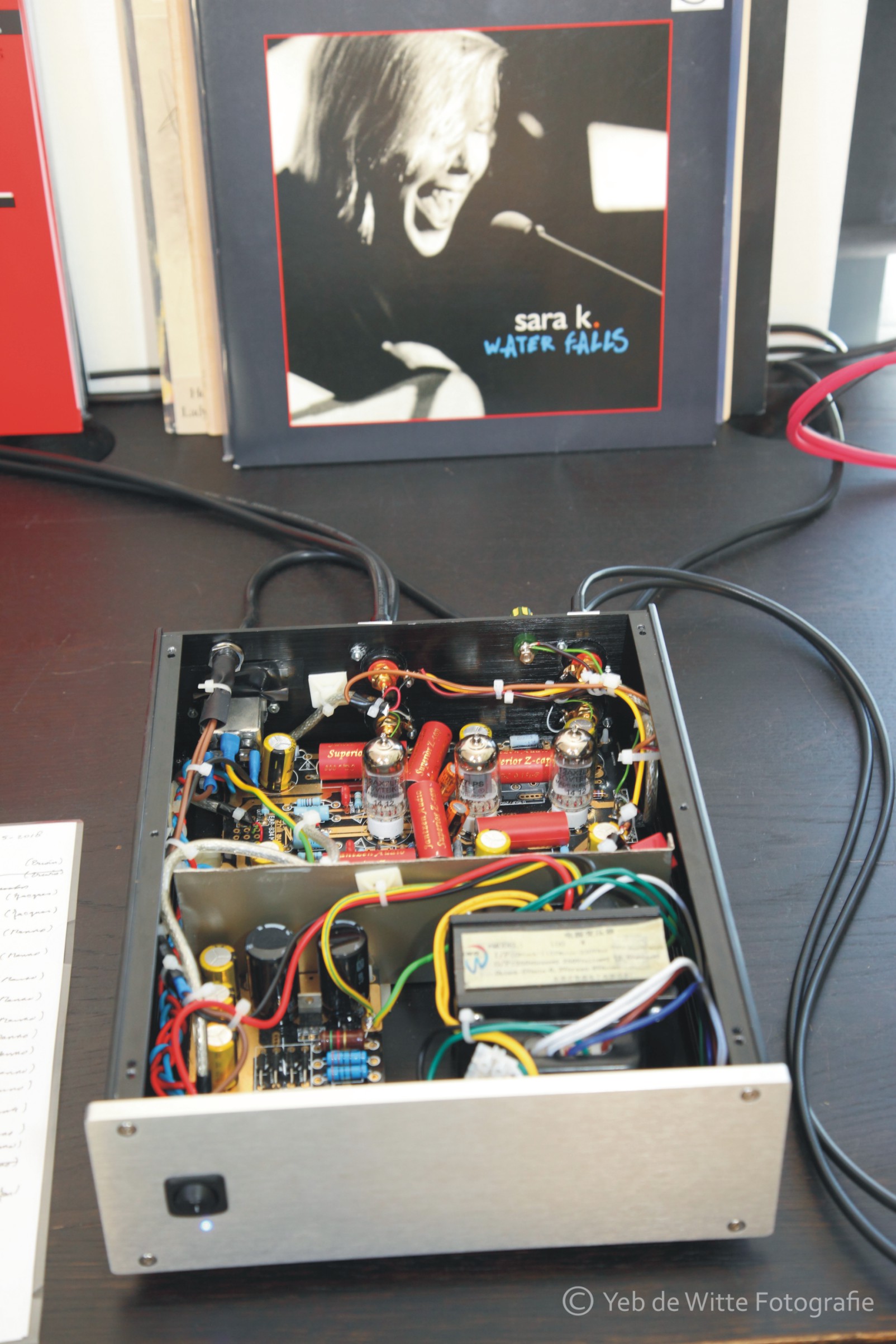 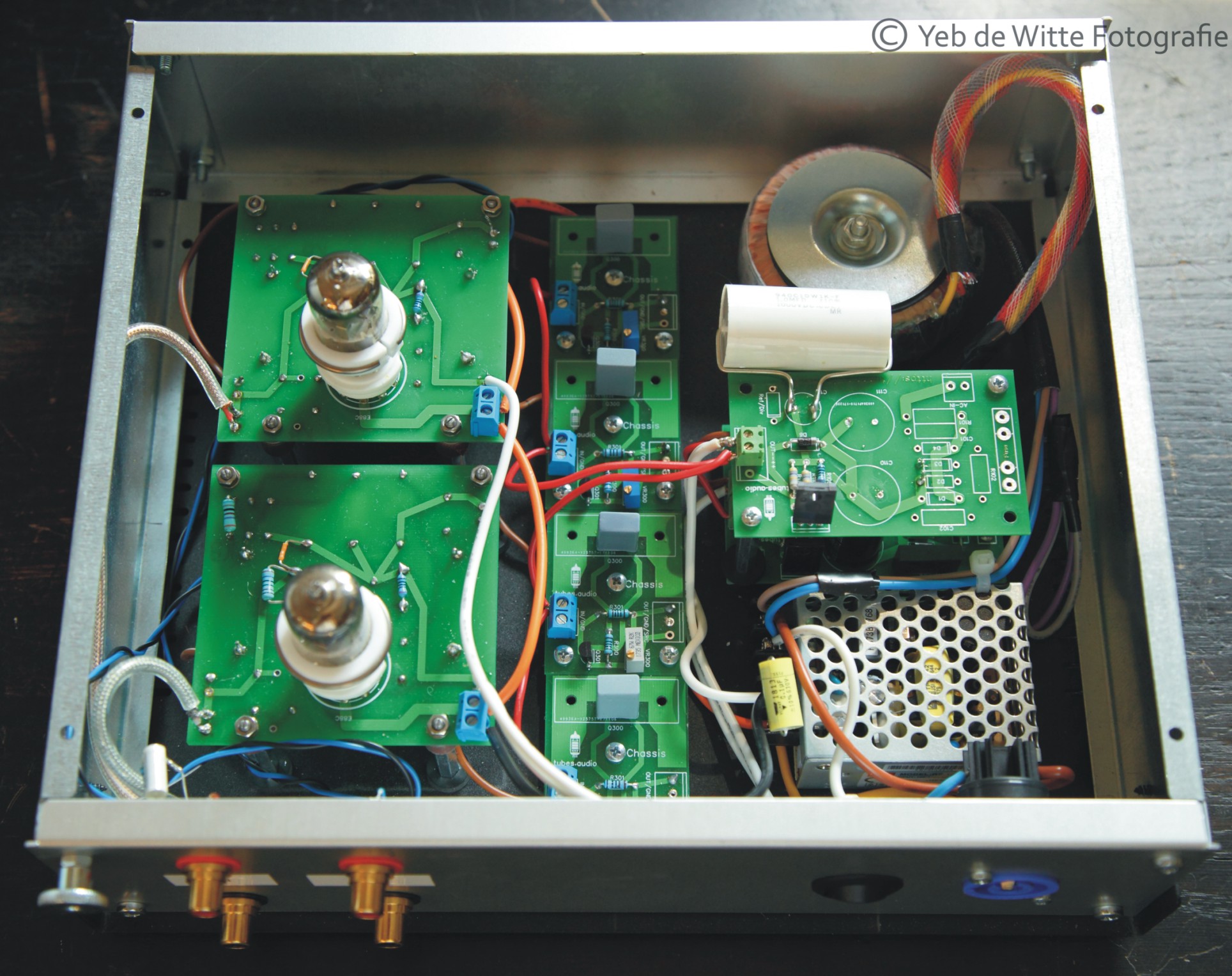 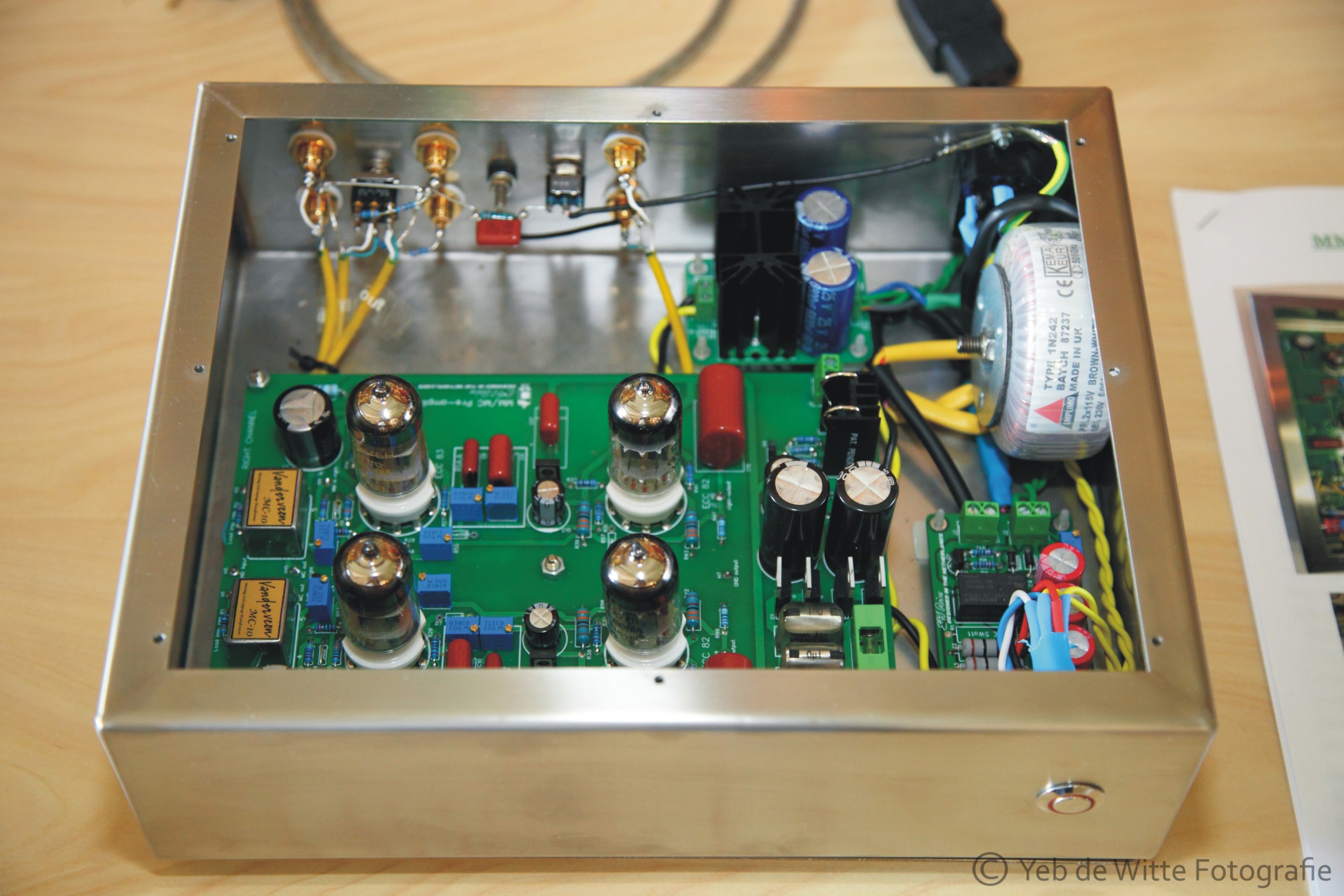 Photo-f
The last contester, Remko Tieleman, applied a very old pre-amp design with active RIAA-correction in the feedback chain, as used in the famous Bocamo tube amplifiers. He made some improvements with constant current sources (CCS) based on the BSP135, followed by a valve-cathode follower, see photo-g. Read his report in TS2017-Remko. His ranking was 4.2. The winners of this contest were Erwin and Frank. In the second comparison, the winners sequence became Frank, followed by Erwin. So, officially Erwin won the contest and Frank won the direct comparison. Both are the toppers of this TS2017 contest. Gilbert Bergh and Simon Zwier (photo-h) showed their not yet finished pre-amps. The Simon pre-amp showed a remarkable sturdy high quality construction. We will evaluate these pre-amps next TS-year. They look very promising. Let's hope the sound quality will be as rewarding. Two guitar amps were demonstrated. The very nice looking wooden cabinet (photo-i Huib Selder) was very promising for the best quality bluesy sound, but unfortunately not yet finished. 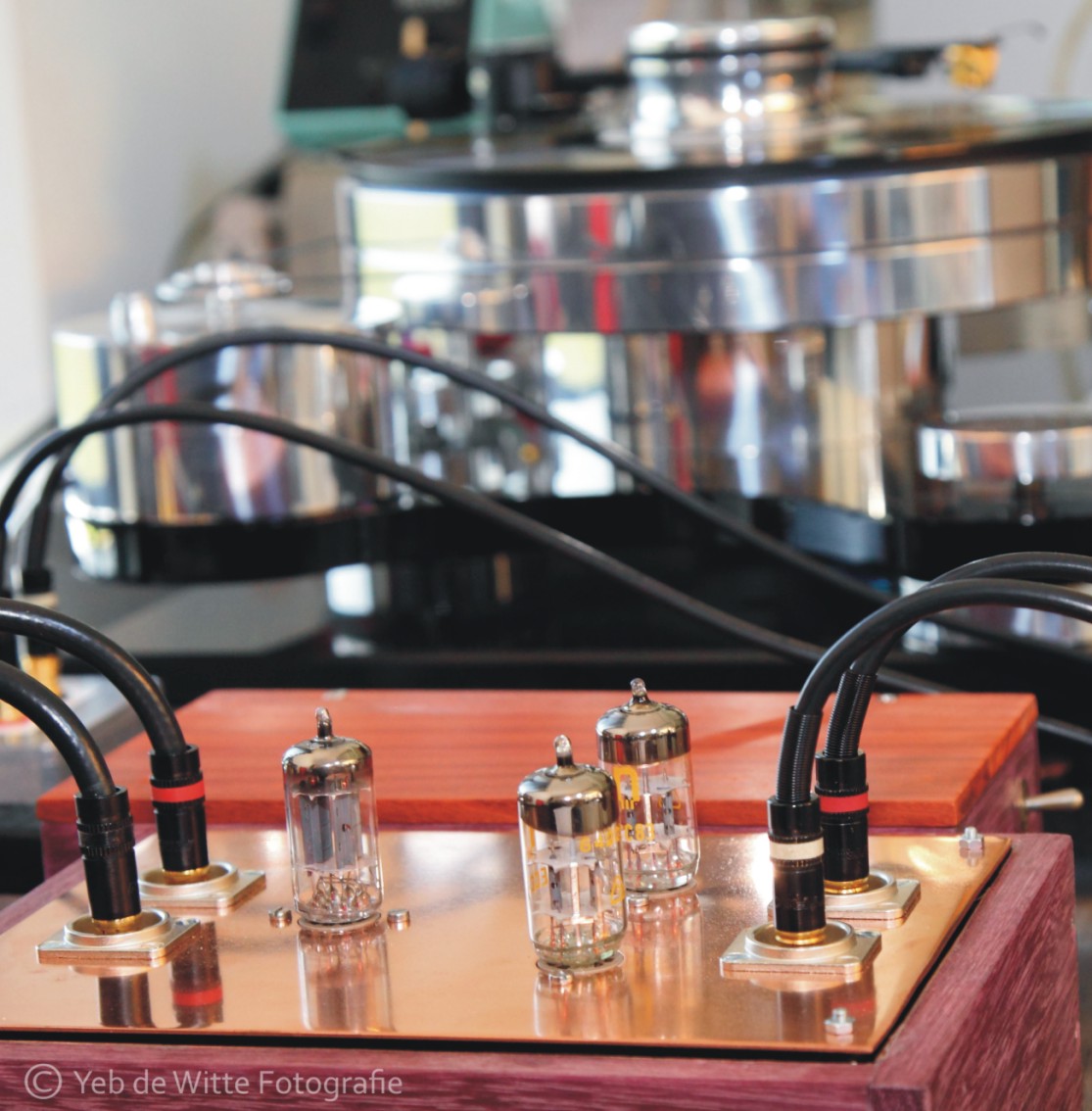 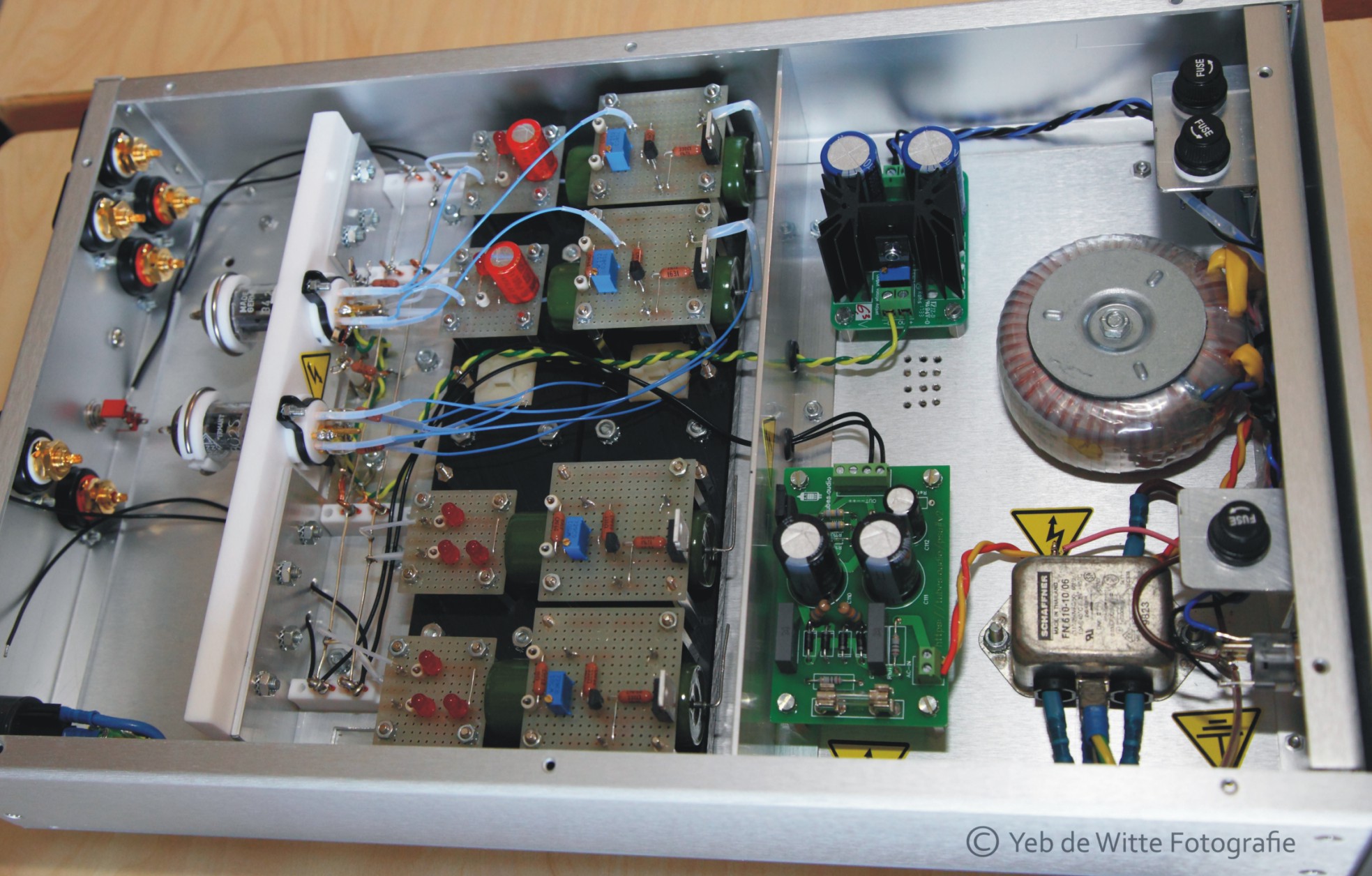 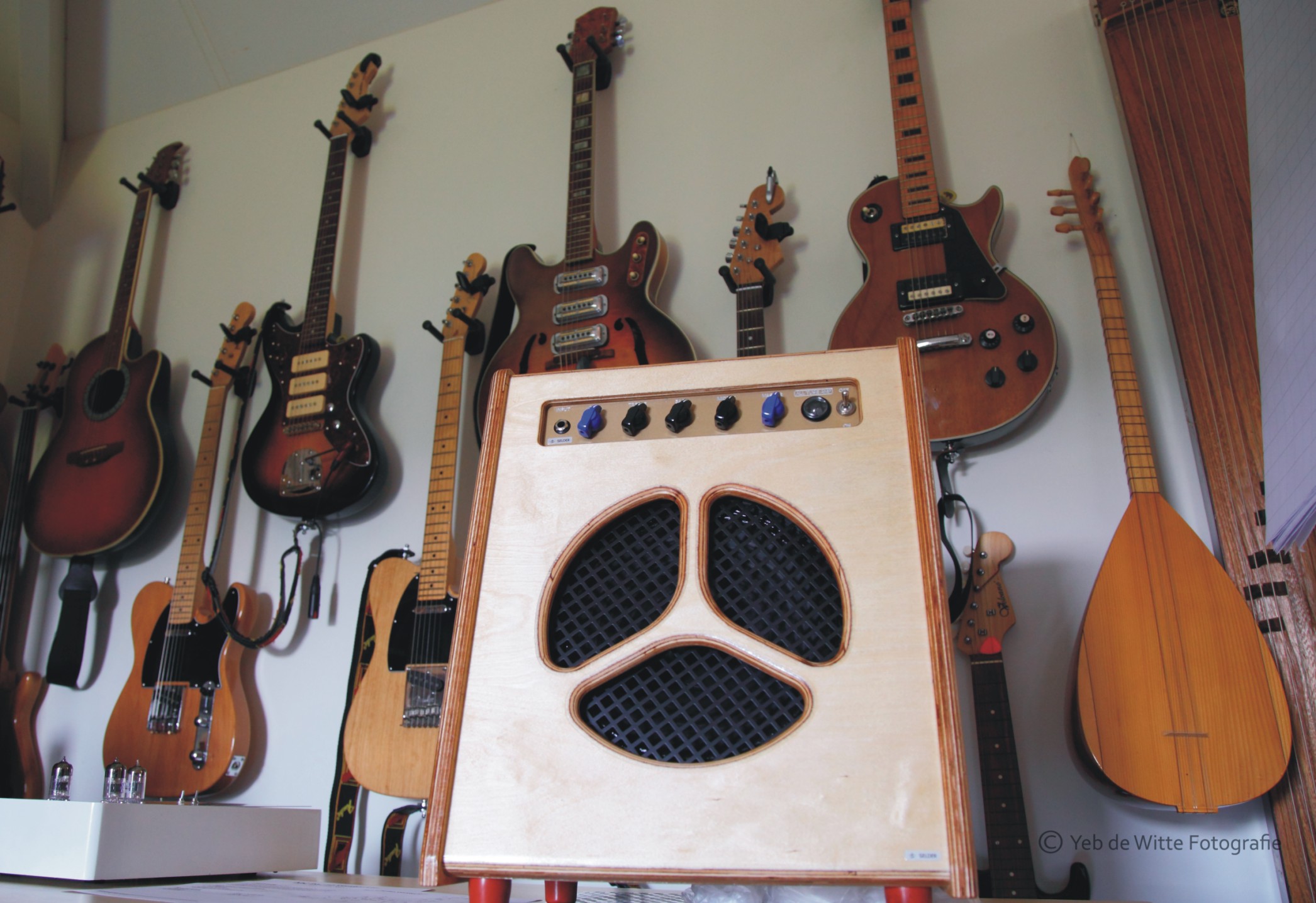 Hans van Hernen demonstrated his finished guitar amplifier with valve input-section and transistor power amplifier. See photo-j and his report TS2017-Hans for more details. I plaid the Stratocaster guitar with this amp (photo-k), and the sparkling sound with vivid twang really was convincing. Let me add a small remark about these last two amps: In TubeSociety we not only deal with high-end stuff. If a student wishes to make a guitar amp, or a tape recorder, or .. he/she has my/our blessing. Go for it! The valve world is not only high-end audio amplifiers. 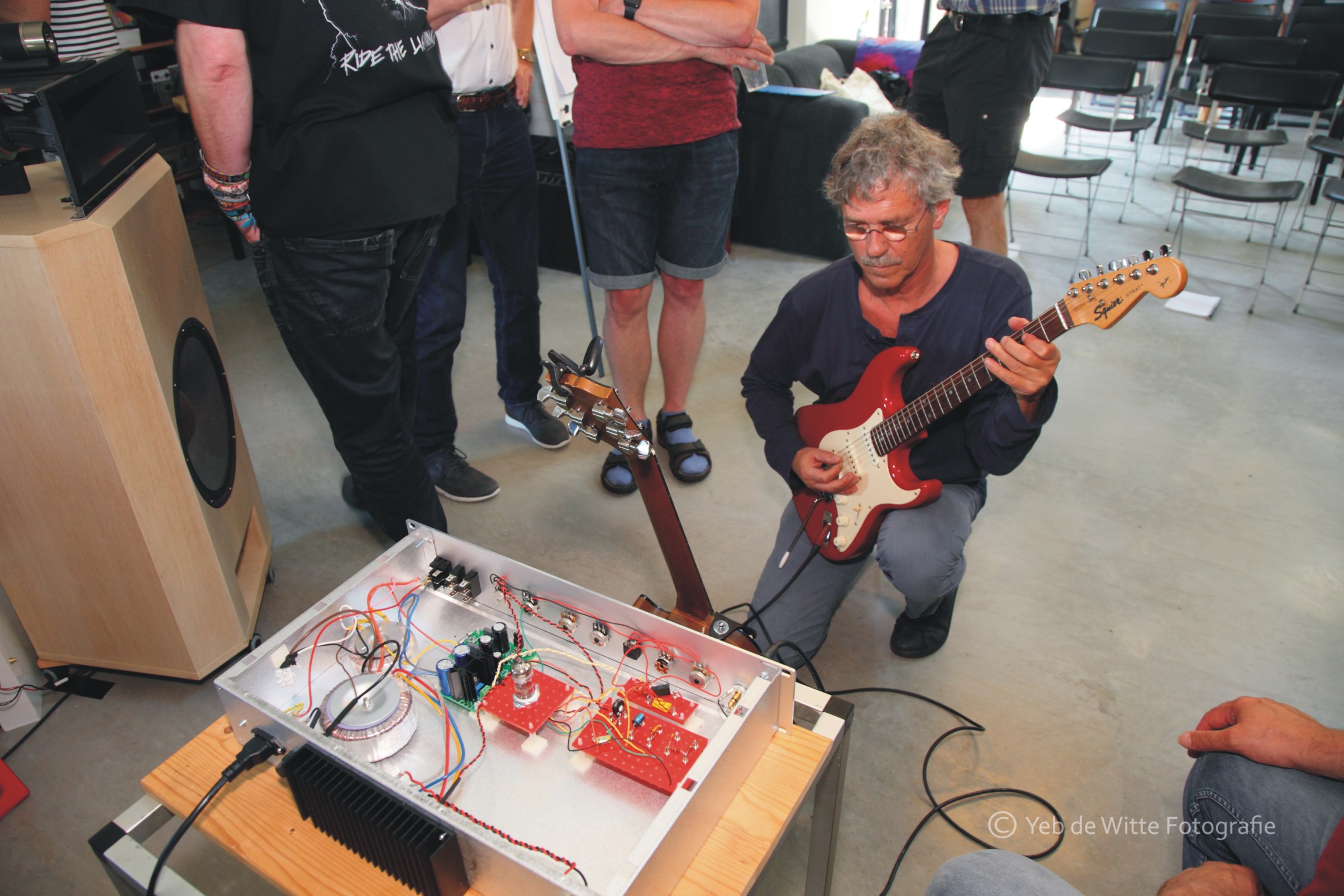 TS2018 subjects for next year: a push-pull Trans Valve power amplifier, based on the Menno-research on transconductance amplifiers -and/or- an active valve crossover.