Why Auto-bias sounds so good?

I know I invented my special Vanderveen auto-bias circuit and Guido Tent made it a beautiful unit. So, one might think that the following article is nothing else than advertising. So wrong this opinion is, because the last month I really was amazed about the remarkable improvements in sound quality with this new unit. The base sounded much cleaner and much more micro details were noticeable. I started a deep going research in literature, used earlier work, performed new measurements and I got support from students (especially Lukasz Jazczuk). All this new work created insight in what happened and that is what I am going to tell in this article. I now can scientifically (objective) explain why the sound quality (subjective) has improved so much.

The schematic below shows the UL40-S2 in its former configuration, without auto-bias or any other modification. The cathodes of both power valves (B2 and B3) are connected to a resistor Rc = 220 Ohm to ground, in parallel with Cc = 1000 uF. Without any music signals, the quiescent currents of the power valves go through Rc//Cc and create a voltage over this circuit. Because the control grids of B2 and B3 are at ground level, the voltage difference over Rc//Cc sets the working point (quiescent point). Any difference between B2 and B3 can be corrected with P4 to make both quiescent currents equal. 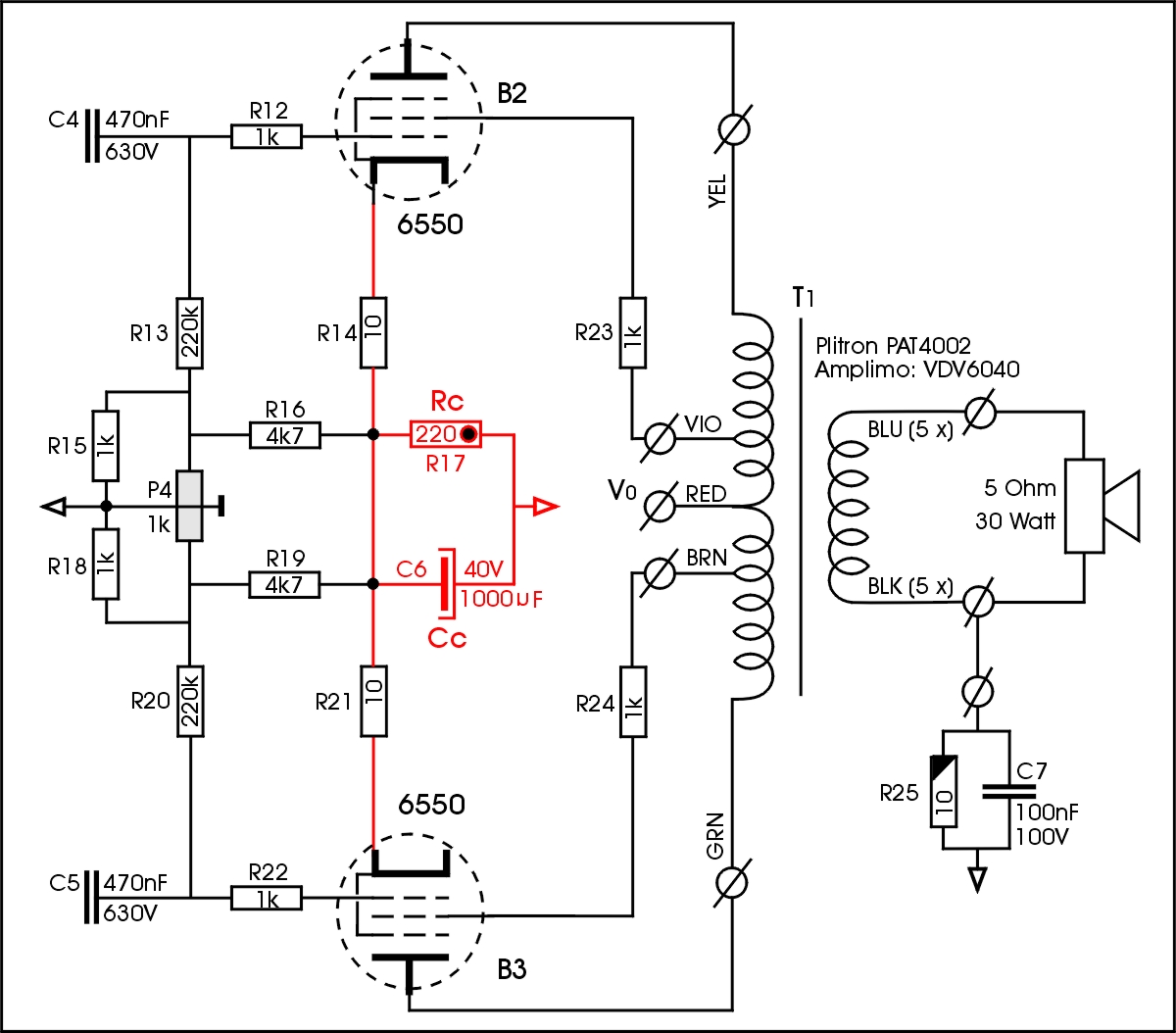 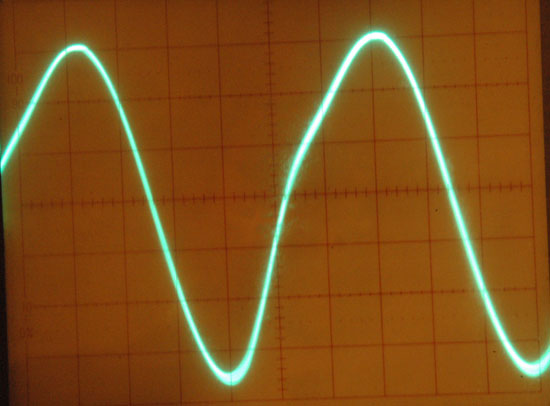 Stability with the new auto-bias unit

With the new auto-bias unit of Guido and me, the situation changes totally. See the schematics below. The unit measures the quiescent current per valve in a very small current window, and does not react at all on the output power level. Under all levels the quiescent currents stay rock stable, constant and equal. Now there is no difference between the quiescent currents through B2 and B3 and the core of the output transformer is not DC-magnetized (assuming correct AC-balance, see later). The measurement below shows that the 50 Hz sine distortion has disappeared. 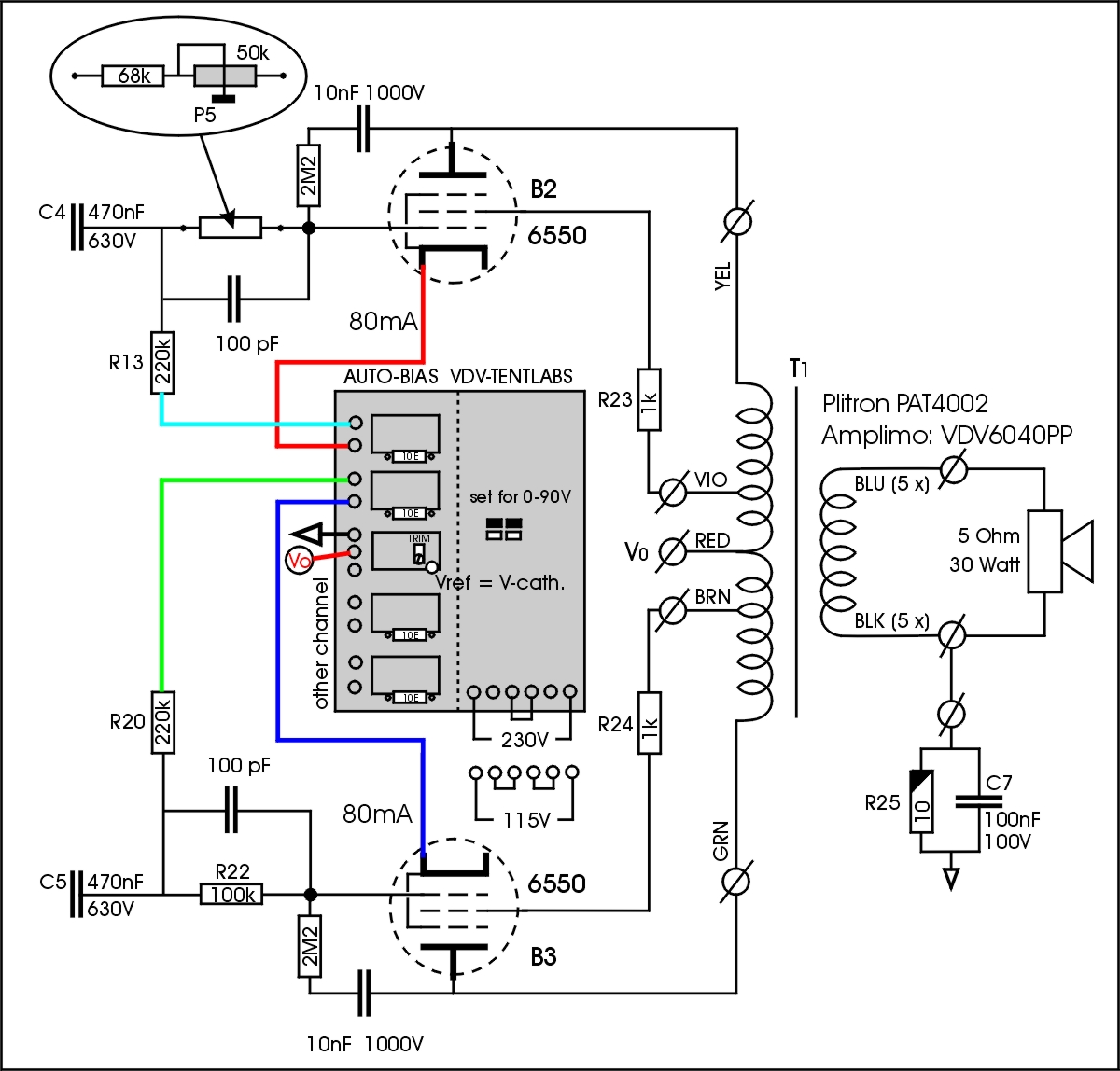 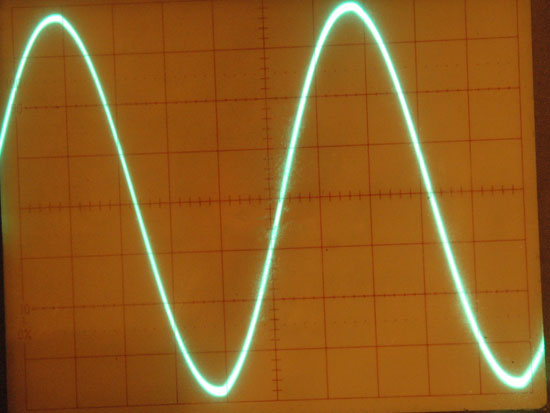 This explains exactly why the base reproduction has improved so largely with the auto-bias unit. The DC-magnetization distortion is absent now, the base tones are clean, independent of the output level. But, more is going on.

What happens inside the core of the opt?

In my recent AES-paper 7125 I explain a conflict inside the OPT when very small signal levels (micro details) are transformed. The signal levels of these micro signals are so small, that the magnetic domains (Weiss areas and their Bloch walls) are hardly able to rotate. The net result is that the OPT starts to weaken such small signals, they appear softer at the speaker terminals. It depends on the sensitivity of the loudspeaker, the distance to the loudspeaker and the actual SPL whether you can hear this weakening or not, but the situation really can occur that the micro details have less SPL than the threshold of hearing. You will not notice them anymore.

But what has the new auto-bias unit to do with this? Let's use the remarkable measurement results of Lukasz to explain. The graph below shows the normalized amplification from input to output as function of the output voltage of my PR20HE-S2 valve amplifier (see elsewhere on my site). The red line is the calculated amplification, while the dotted line is the measured one. The measurement is performed at 20 Hz with the Rhode&Schwartz UPV Audio Analyzer, certainly a reliable piece of equipment.

This measurement shows a remarkable result. It proves that small signal levels get weakened and it shows that the calculated and measured starts of weakening lay at different output levels (they differ almost a factor of 10 which equals 20 dB). What is the cause of the difference? Closer research showed that the quiescent currents of the power valves were not exactly equal during this measurement, they differed about 0.3 mA, which is little. This small difference current was able to DC-magnetize the core of the OPT and consequently the magnetic domains became extra bound to their position. This created the extra weakening in the measured situation. If we apply the new auto-bias unit, then the quiescent currents are equal within 0.05 mA (or better) and the dotted line shifts left towards the red line. In other words: without any DC-magnetization of the core we can hear almost 20 dB deeper into the sound before any extra weakening of the micro details occur. Now it is clear why we hear the micro details much better with the auto-bias unit.

In this research and article I am able to explain scientifically why base tones sound cleaner and why micro details are better noticeable with the new auto-bias unit.

In the UL40-S2 the 6550 power valves operate optimal at a quiescent current of 80 mA. The high supply voltage is then 355 V, so the anode dissipation equals 355 * 0.08 = 28,4 W per valve. This is smaller than the maximum dissipation allowed of 40 W and ensures an acceptable long lifespan of the valves. Also in this setting the amp operates almost completely in class A, which minimizes the dynamic damping factor distortion (DDFD) as explained in my books and publications.

There are at least three methods to optimize the AC-balance in the UL40 in ST-mode with auto-bias. The first one is to use a 1000 Hz input signal and amplify it to an output level of about 20 Vpp in a 4 Ohm dummy load. Listen to the sound coming from the output transformer (it sings a little) and minimize that singing sound with P3. The second method is to use a distortion meter and to trim P3 for minimal distortion at 1000 Hz at 20 Vpp in a 4 Ohm load. In the third method, the oscilloscope is switched in the X/Y-mode, with the 1000 Hz sine input signal to the X-input and the output signal to the Y-input. On the screen the Lissajoux figure (line) is visible and make this line as straight as possible with P3. All three measurement methods deliver the same results (the same trim position of P3). There also is a hidden fourth method: don't measure at all, put P3 in its middle position, and I am sure that this is very close to the optimum.

I hope that the visitors of my web site have noticed that I gave my UL40 a lot of attention during the last month. The introduction of the ST-mode and the new auto-bias unit made it possible to discover new refinements in the sound quality of this amplifier. For me personally it became of the utmost importance to reach again for the top and to understand scientifically why the improvements were so good. I notice that in my present work objective and subjective are coming closer and I really do like that. Enjoy listening to my UL40-S2 in ST-mode with auto-bias!